Principal Photography Has Completed for the Western Feature Film… 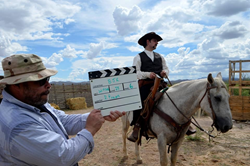 “This is going to be an action packed, fun-filled journey across the southwest! Get ready to hear the untold nickle and dime story of Frank and Jesse James!”

Well known actors Frank Powers, http://www.imdb.me/frankpowers and Tony Toste, http://www.imdb.me/TonyToste, were seen at the Radium Springs Western Back-Lot as Principal Photography for the Feature Film ‘Brothers James: Retribution’ ended, or as they say in Hollywood, “Its a wrap!”.

The film’s Star and Executive Producer, Frank Powers, spoke about how he felt about the film, saying, “I am very excited for the world to see this unique take on a traditional western film. I could not be more happy with the product we have from the amazing performance of our cast and crew. This is going to be an action packed, fun-filled journey across the southwest! Get ready to hear the untold nickle and dime story of Frank and Jesse James!”

Actor Tony Toste also spoke about his thoughts working on the western adventure, saying, “It was not only a pleasure, but an honor working with Frank Powers and his wife Michelle. ‘Brothers James: Retribution’ has been my favorite project I have ever been apart of. The Cast was and is extremely talented and were very kind to me. The crew did not stop working and the passion involved was truly extraordinary. Del La Pour Media essentially built an entire Western Town in the middle of New Mexico, at The Studios at Radium Springs on a Back-Lot. The Set dressings, wardrobe, horses and live fire action stunt scenes were all spectacular!”

Stay up to date on Red Carpet Premieres, Theatrical release dates, Behind the Scenes, All the cast and their upcoming projects at http://www.bjrmovie.com