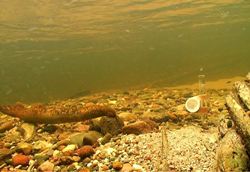 This sea lamprey study demonstrates the flexibility of the polymer emitter technology for release of chemical cues in aqueous environments, after previous use with sharks and trout. For the sea lamprey, this gives us another technique to be employed in sea lamprey control.

A collaboration between scientists at Seton Hall University, Michigan State University, and the US Geological Survey (USGS), funded by the Great Lakes Fishery Commission, has developed a technology using polymers for the controlled release of chemical signals into natural waterways. The purpose of this technology is to use organic chemistry and polymer/materials science to create materials for marine applications to help protect people as well as the health of our oceans and waterways by developing environmentally safe ways to control invasive species such as the sea lamprey.

This ground-breaking research, “A simple, cost-effective emitter for controlled release of fish pheromones: development, testing, and application to management of the invasive sea lamprey,” has been published today in the scientific research journal, PLOS ONE.

The polymer emitter technology was developed in the laboratory of Professor James E. Hanson in the Department of Chemistry and Biochemistry at Seton Hall University, and field tested by Associate Professor Michael Wagner of the Department of Fisheries and Wildlife at Michigan State University and Dr. Nicholas Johnson of the USGS. The polymer emitters have a simple tubular design, filled with a mixture of a slowly dissolving, biodegradable polymer and a chemical attractant or repellent.

“This sea lamprey study demonstrates the flexibility of the polymer emitter technology for release of chemical cues in aqueous environments, after previous use with sharks and trout. For the sea lamprey, this gives us another technique to be employed in sea lamprey control,” explained Professor Hanson.

The sea lamprey, Petromyzon marinus, is an ancient jawless fish, native to the Atlantic Ocean and the streams feeding into it. They are not native to the Great Lakes and it is believed that they gained access to the Great Lakes when the Welland Canal allowed the lamprey to travel around a great natural barrier. In their parasitic phase, they have devastated native fish species and damaged fisheries in the Great Lakes. The sea lamprey is a nocturnal fish that relies on odors to find prey, avoid predators, and navigate back to rivers to spawn.

In field studies, 3kPZS, a component of the male sex pheromone of the sea lamprey was released from the emitters. Emitters releasing 3kPZS were placed in simulated lamprey nests in the Ocqueoc River and behavior of tagged female lamprey evaluated, revealing attraction of female lamprey to the 3kPZS released by the emitters.

Traps on the Cheboygan, Manistique, and Muskegon rivers were baited with 3kPZS containing emitters, resulting in increased capture of female lampreys. The field work with the sea lamprey demonstrates how the polymer emitter technology represents a far more cost-effective approach to releasing waterborne odors to control invaders than the use of pumps. The Great Lakes Fishery Commission is a joint effort of the United States and Canada to coordinate fisheries research and management on the Great Lakes.

PLOS ONE features reports of original research from the natural sciences, medical research, engineering, as well as the related social sciences and humanities that will contribute to the base of scientific knowledge.