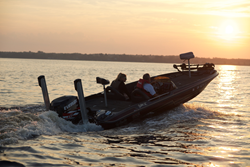 Attracting roughly 2,000 anglers from around the globe annually and having an approximate $3.2 million economic impact on the region, the Adirondack Coast offers world-class fishing and that down-to-earth Adirondack hospitality visitors crave.

The Adirondack Coast Visitors Bureau and the City of Plattsburgh excitedly welcome over 400 pros and co-anglers to the 3-day Costa FLW Series at the Plattsburgh City Marina, kicking off on Thursday, June 21st at 6am! This is the third event in the #adkcoast pro bass fishing season and the largest turnout the FLW has seen in its Northern division.

Competition is sure to heat up as participants battle it out on Lake Champlain’s waters, reeling in impressive catches in the hopes of scoring the top award of up to $95,000, including a brand new Ranger bass fishing boat! Weigh-ins for the FLW Costa Series will be held at the Plattsburgh City Marina daily starting at 2pm Spectators are welcome, so don’t miss your chance to “catch the excitement” at this free event!

The FLW Foundation is once again bringing back their United Fishing Derby on Saturday June 23rd at Wilcox Dock from 11am-1pm. Any child under the age of 18 or any Special Olympic athletes are welcome to join in on the fun. The first 50 participants get an event goodie bag! Sign up today by contacting Tom Stark at tom-bassman(at)hotmail.com.

Bass fishing season on the Adirondack Coast continues with the following events:

Each year, the Adirondack Coast Visitors Bureau proudly partners with The City of Plattsburgh to host professional bass fishing tournaments on Lake Champlain, named one of the top 100 best bass fishing lakes in the United Stated by Bassmaster Magazine. Attracting roughly 2,000 anglers from around the globe annually and having an approximate $3.2 million economic impact on the region, the Adirondack Coast offers world-class fishing and that down-to-earth Adirondack hospitality visitors crave.

Interested in learning more about any of these upcoming fishing tournaments? Visit goadirondack.com/bass.