I’m not a real serious bear hunter. Most years it’s just another opportunity to hunt. However, I don’t like to lose, and this particular bear was starting to get the best of me and he made it personal!

I have a pond about 10 minutes from town. I can easily be there hunting after work. Some years there’s bears there, some not. It’s buried in thick piñons and it has very limited visibility. Right from the start, there were bear tracks at the pond. I would sit about 30 yards away, as that was the furthest I could get and still see. Every afternoon after work I had the same routine. Park a half a mile away and sneak to the pond. No bear? I’d then wait there until dark. Every time there was new tracks, but he sure wasn’t coming while I was there. I changed things up and went on a Saturday morning. I got there the same time he did, but he spooked with no shot.

I went back to my after work routine with the same negative results. This bear was winning this game and really starting to aggravate me! So with another work day ending, I set out again with what was starting to be a monotonous routine. It was pouring rain when I got to my usual parking spot and I wasn’t really excited about getting out in it, but I rainsuited up and set out. I snuck down there like always, and no bear. I circled the pond and there was dry bear tracks leaving the pond… I had missed him by just seconds! So I circled up above to try to cut him off. By now the drizzle had turned to buckets. When I got directly above the pond, there was a dry bear bed with dry tracks leaving. The only view from that bed was my truck parked a half mile away! That clever bugger had me patterned! So now I knew I was hot on his trail, but with the thick piñons and junipers, I really didn’t think I had a chance, unless it was in my lap close! I tracked for another few minutes and came to a rocky spot I couldn’t track across. I circled around a big dead piñon, and there he was, a mere 4 yards away, rooting through a buried hornets nest. His belly got the best of him and distracted him from the predator he knew was after him. I wasted no time in putting my crosshairs on the crease of the shoulder. At the shot, he ran in the least obstructed direction, right towards me! As fast as I could bolt my browning, I gave him another in the chest at arms length with only a log between us. That was enough and he fell back into the hornets nest.

While Mr. Bear might’ve been oblivious to hornet stings, I am not. I got about 20 hits before I could the dead bear rolled further down the hill!

He’s not the biggest bear, but with a cat and mouse game like that, it was still a very memorable hunt. Skinning and packing him out in the dark and rain made just another interesting addition to an already exciting hunt.

What do you plan to make from your harvest?

Bears are for breakfast sausage! 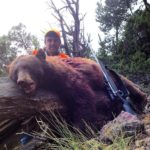 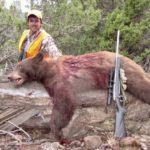 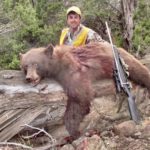