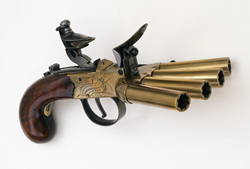 …instead of reloading cartridges, staffers are reloading the entire firearms museum.

The Cody Firearms Museum (CFM) at the Buffalo Bill Center of the West knows a thing or two about reloading—guns and rifle ammunition, that is. Today, however, instead of reloading cartridges, staffers are reloading the entire firearms museum.

On the proverbial drawing board since 2009, the time is now right for the museum to undergo a $12 million renovation to better share the stories related to its extraordinary collection of firearms. The museum aims to reopen in summer 2019.

Meanwhile, the CFM—knowing how popular its collection is—announces a plan to place firearms exhibits throughout the Center during construction. The plan includes an arsenal of the museum’s most popular and most important firearms located in the Center’s Anne & Charles Duncan Special Exhibition Gallery slated to open later this month.

“If ever there was a ‘come full circle’ moment, this is it,” explains Ashley Hlebinsky, the Robert W. Woodruff Curator of the Cody Firearms Museum. “This temporary exhibit houses some 500 firearms—including a chronological display of Winchesters in the very space where the collection was first put on display in 1980!”

Staffers have created a “Firearms Finding Guide” brochure for visitors that targets firearms exhibits throughout the Center including “Art & Arms of Mountain Men” in the Whitney Western Art Museum and the popular Hollywood firearms in the Buffalo Bill Museum. The guide is also available online.

“The Center of the West is a bit of an anomaly in the firearms world,” Hlebinsky continues. “Unlike most ‘gun museums,’ we have four other museums on site, each with different content. Consequently, we have some segment of our nearly 175,000 visitors each year who aren’t gun enthusiasts. They might pay their admission to see western art or Plains Indian culture, and then wander into the gun collection out of curiosity, coincidence, or accident—a gallery about which they have little, if any, experience or interest.

“With our CFM Reload, we’re purposely adding components to help visitors learn about firearms history, terminology, and safety,” Hlebinsky adds. “Our goal is to put the stories of these guns in context—more than has been done in firearms museums in the past.”

The CFM houses the most comprehensive collection of American firearms in the world. In 1975, the Winchester Arms Collection—the heart of the CFM—ventured west to the then-named Buffalo Bill Historical Center as a loan from the Olin Corporation. To celebrate the nation’s Bi-Centennial in 1976, the Center first displayed the collection in an exhibit located in the Buffalo Bill Museum, with none other than actor John Wayne joining the dedication. Later, in 1980, the “Winchester Museum” moved into the Center’s special exhibitions area.

By 1988, Olin had deeded the collection to the Center as a gift. Then, the collection moved to its current space in 1991, the Cody Firearms Museum. To date, the CFM boasts more than 7,000 firearms and 30,000 firearms-related artifacts produced by manufacturers and artisans from the 15th century to the present.

Relocation of firearms, artifacts, and equipment began August 13, 2018, making the space inaccessible as demolition and construction is underway. Finally, an innovative iScout application (iScout is the Center’s online exploration app) allows visitors to search for their favorite guns, enlarge the image to study detail, and learn if the firearm is on display in the temporary exhibit.

“We’re so excited about the new CFM,” Hlebinsky says. “We have quite a year ahead of us, and we urge visitors to be patient; the project promises to be well worth the wait—and then some. Stay up-to-date with all the latest on our Facebook page, @CodyFirearmsMuseum.” #CFMreloaded #Gunbelievable #100YearsMore

Since 1917, the award-winning Buffalo Bill Center of the West in Cody, Wyoming, has devoted itself to sharing the story of the authentic American West. The Center, an affiliate of the Smithsonian Institution, is now in its fall schedule, open daily, 8 a.m. – 5 p.m. For additional information, visit the Center’s website or its pages on Facebook, Instagram, Twitter, and Google+.