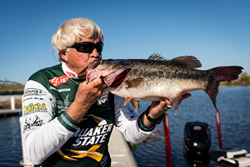 “I am honored that Quaker State and Kentucky Speedway have asked me to be the Grand Marshal for the Quaker State 400 this weekend,” said Houston.

“I am honored that Quaker State and Kentucky Speedway have asked me to be the Grand Marshal for the Quaker State 400 this weekend,” said Houston. “I got to drive the pace car a couple of years ago, so this is another bucket list item I can check off. It is a special honor to me because not only do I have a lot of NASCAR drivers that are friends of mine, but I know that a tremendous amount of NASCAR fans are also fishing fans.”

Over the years, Houston has had many achievements. He has won two BASS Angler of the Year titles and fished 15 BASS Classics and one FLW Championship. Houston also won year-end Classics with American Angler and Project Sports, plus multiple regular season wins with BASS, AA, and PSI.

Houston isn’t the only person in his family to have had many accomplishments. His wife, Chris, was the first woman ever inducted into the Professional Bass Fishing Hall of Fame, winning seven Angler of the Year titles, Three Classics, multiple tournaments, and over 25 boats along the way!

The 2018 season at Kentucky Speedway begins in July with the return of a NASCAR tripleheader weekend anchored by the Monster Energy NASCAR Cup Series Quaker State 400 on Saturday, July 14. The Camping World Truck Series Buckle Up in Your Truck 225 starts the weekend on Thursday, July 12 and the Xfinity Series Alsco 300 is Friday, July 13.

FLW is the world’s largest tournament-fishing organization, providing anglers of all skill levels the opportunity to compete for millions in prize money in 2017 across five tournament circuits. Headquartered in Benton, Kentucky, with offices in Minneapolis, FLW conducts more than 235 bass-fishing tournaments annually across the United States and sanctions tournaments in Canada, China, Mexico and South Korea. FLW tournament fishing can be seen on the Emmy-nominated “FLW” television show, broadcast to more than 564 million households worldwide, while FLW Bass Fishing magazine delivers cutting-edge tips from top pros. For more information visit FLWFishing.com and follow FLW on Facebook, Twitter, Instagram, YouTube, and Periscope: @FLWFishing.